Also termed a sett survey, this survey type can be carried out year round, although as detailed in our survey calendar, it is most effective outside of the summer growing season when vegetation is low.

A badger walkover survey comprises a search for evidence of badger at a site, such as sett entrances (normally 25 to 35cm wide and shaped like a ‘D’ on its flat edge), large spoil heaps outside sett entrances, bedding, footprints,
mammal paths, latrines, hairs, scratching posts, and signs of digging for food or ‘snuffle holes’.

From this data, an understanding of the importance of a site to badgers can be made, including categorising sett types (main, annexe, subsidiary, or outlier), which informs subsequent mitigation strategies.

Where a badger sett is present, it is protected under UK wildlife legislation if it is ‘active’. Therefore, automated night vision cameras are used to determine if a badger sett is active or inactive. An active badger sett is confirmed if badgers are recorded during a period of continuous filming, such as the photograph and footage below captured on our cameras. 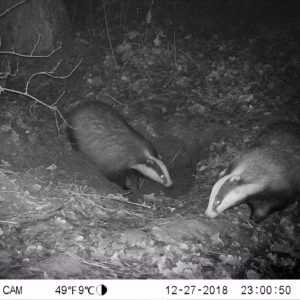